These Census Numbers Seem Off

The US Census issued these facts in 2013 for Caribbean American Heritage Month.

How Many of Caribbean Ancestry in the United States?

Where is the Caribbean Community’s Coalition?

I recently had a conversation with a friend about immigration and we observed that unlike what’s happening in the Latino community, there’s no Caribbean centric organization or coalition that’s mobilizing people from the Caribbean community to get involved and pushing President Obama’s immigration reform agenda. 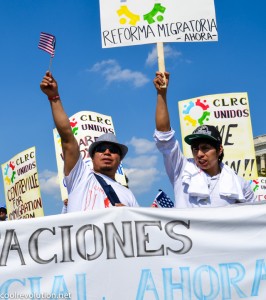 There are individuals who are taking the message to the people. Including Felicia Persaud of Hard Beat Communications.

Felicia Persaud, the CEO of Hard Beat Communications in New York, led an effort in 2008 to get recognition for a Caribbean origin category on U.S. Census forms. The measure received support through a bill in the House and Senate but has since stalled there. And despite a grassroots effort to get Caribbean people counted in the 2010 Census, the true count of Caribbeans remains a mystery.

A recent article note that:

[Ms. Persaud] along with Valence Williams and Menes De Griot of Guyana, were the lone Caribbean nationals joining the New York Immigration Coalition organized rally in Brooklyn, NY, as they put the spotlight on the voiceless Caribbeans who are undocumented and desperate for immigration reform yet remain in the shadows.

There are 4 key principles to President Obama’s Immigration Reform:

There’s a small window to pass emigration reform which is between June-September. If the reform does not get passed during this window, there may not have the opportunity again under Obama presidency. Why is it important that the reform get’s passed during this window? In order for the reform to get passed it will need support from some Republicans. The mid-term elections are in November and there could be less support from Republicans especially those who are up from re-election.

Why isn’t there a central coalition?

My friend and I discussed possible reasons why there is no central Caribbean coalition. Or why the efforts of Ms. Persaud isn’t getting much support. And possible reasons included fear of not wanting their immigration status known or fear of deportation.

“It’s beyond incomprehensible that some three million Caribbean people can party each year down Eastern Parkway in Brooklyn, New York but only three of us can show up to make our voices heard for something that is important to thousands in our community,” said Persaud.

There are millions of undocumented people from the Caribbean that would benefit from the reform. Let’s place the spotlight on this important issue for Caribbean Heritage Month

Read and Carry On: Digging Deeper – Finding the What & Why

How to Achieve a #Bussoutyear

Keep Calm and Carry On Friends!