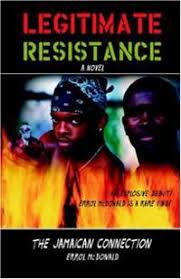 Legitimate Resistance: The Jamaican Connection by Errol McDonald, tells the story of the GRs who shed their “get rich (by any means necessary) and floss” mentality to that of defending the rights of the oppressed ghetto people. This “elite” group of revolutionaries are determined to free the Jamaican poor from the remnants of colonialism and from political subordination which affects crime, poverty and the overall social and economic structure of Jamaica. Their aim is to unite all the ghettos across Jamaica to form a Legitimate Resistance to the System.

The book’s synopsis leads us to think that the story is about Susan Adejerlolo, a good country girl who moves to Kingston and falls in love with Silver, a gangster. The relationship’s only purpose in the novel was to introduce the main characters by way of Susan moving from Greenville to Kingston. The relationship between Susan and Silver was under-developed and therefore wasn’t an important element of the story. The book is about Click, the ambitious, ex-soldier and modern day Robin Hood who sees himself as a great visionary and leader; and Silver, his right hand man and a fearless warlord who is able to unite all the leaders of the ghettos across Jamaica. Click and Silver are part of the Ghost Riders or GRs and they control the Kingston inner city ghetto called Penham. The GRs get their names from the high powered motorcycles that they ride which allows them to swiftly escape the police and their other enemies. The GRs have their base in Texas, a heavily guarded fortress in the hills above Penham. The GRs is comprised of ghettos dons, their followers, ex-soldiers and ex-policemen. Their activities include drugs, illegal weapons distribution and the [business] protection racket. Their main enemies other than the government, police and soldiers are the deportees or “dips” who they see as the real criminals for their senseless killings, greed and are faulted for “destabilizing the business”.

After an attempt by the police force to exterminate the GRs, Click and the members of the GRs decide to lay low until they can rebuild their resources. During this time Click and two other henchmen set out for Miami where Click quickly sets up himself as a leader of the criminal underworld, creating a crime network called Organ Time. He establishes himself as a prominent business man by setting up “legitimate” companies to launder the money from criminal activities while making other “wise investments”. Worldwide, Click quickly gains the admiration, respect and loyalty of the local drug kings who consider him as their leader. The situation in Jamaica soon requires the return of the undisputed leader of the resistance now called “The Alliance”. Using his vast financial resources and a major arms fraud scheme, Click is able to gain all the military hardware fit for a major war, so impressive that I find it hard to believe that our Big Brother to the North (USA) would not have noticed it. Even after the United States sent soldiers and CIA operatives to Jamaica, the Alliance was able to snuff dem out like nutten. I consider the 1983 Invasion of Grenada, where the United States and six other islands including Jamaica landed troops on the island in response to a coup d’etat. Considering this day and age, something like that would make Jamaica in the eyes of George Bush, the new face of terror! However, Click seems to be more prepared than the Allied Nations in their war on terror because his schemes go unnoticed and without retaliation. General Click attributes his military prowess to being trained at a major military school in “Hengland”.

Silver successfully united the leaders of all the ghettos across Jamaica from “Jungle, Rema, Tivoli …and as far away as [the leaders of] Flankers and Canterbury.” It’s an all out war against the Government of Jamaica because the only way to affect change is for the Alliance to become the next government of Jamaica. Soldiers and Policemen are captured and killed or “reprogrammed”; all politicians are ordered to vacate their offices; Business men not associated with the Alliance are ransomed and their execution is video taped if the ransom is not met so as to send a message. Young boys are recruited to the Alliance Army and Amy Braithwaite the sheltered uptown girl who realizes the injustices against the poor, form a women’s brigade where they are styled in berets and AK 47s. Click ultimately comes to power as Chairman Click, the National President of Jamaica and institutes many changes. Each parish became an independent state with its own laws and rules. (Although the author doesn’t mention it but the system he describes is similar to the United States’ Federal and State government.) The new government instituted community tourism where tourists are encouraged to live among the people. The large hotels were transformed into housing complexes for residents. The Ethiopian Orthodox Church became the official Christian Church in Jamaica. All other churches were stripped of status and official recognition and were treated with suspicion and disdain for their part in the conspiracy to keep black Jamaicans ignorant and powerless. Ganja is legalized unconditionally and Jamaica began controlling the manufacturing of its own bauxite production. These were just some of the new and welcomed changes that the Alliance brought to the new Jamaica. In no time, Jamaica is seen as an investor’s paradise showing unprecedented economic growth.

I did not like how the book was written because it was hard to read at times because the author did not establish an era or time frame of the events. Instead, the book seems to be a hodgepodge of different events in Jamaican and World History spanning the past thirty (30) years or so. As for the author’s audience, the book was clearly not written for Jamaicans. If it was also intended for a Jamaican audience, the author failed miserably to cohesively write the book so that readers at both ends of the spectrum would be satisfied. For instance on page 212, Silver is in a state of confusion about his relationship with two women, who are cousins. Silver says:

“Marsha is not dull or ignorant. She is quite deep, patient and considerate. She is very witty and have a real Jamaican sense of humor mixed with the wisdom of the ancients”

Dull? Witty? I’m sure Mr. McDonald could’ve found a word other than witty to appease both audiences. Couldn’t he say, “Marsha smart an’ full ah vibes (or energy)…” (Hold the laughter, I have one more)

On pg 219, Silver’s picture was posted with a reward and all the other GRs where making fun of him, Silver says:

“Me is a good looking bwoy! A lie? He asked jokingly. They all agreed. He did have features of an Ethiopian poet or a modern romantic.”

Which Jamaican man (in Jamaica’s homophobic society) is going to think of another man of as a “modern romantic”? Oh wait, it’s the narrator who said it and not the characters and yeah the characters didn’t say it out loud. Ok misunderstanding. At any rate, this type of dialogue is far from being authentic, I didn’t even think it was funny it was just annoying.

The most uncomfortable thing about the book was the coup d’etat against the government and for two reasons. First, up until now, I had never entertained the thought that this could happen in Jamaica. Secondly, after coming to terms with the fact that it could, the author’s happily ever after ending is just that, a fairy tale. Consider Uganda and the Lord’s Resistance Army (LRA) a paramilitary group that has been “engaged in an armed rebellion against the Ugandan government” since 1987, achieving the unfortunate distinction of being Africa’s longest running conflict. What’s the difference between Click and the likes of Joseph Kony or Idi Amin? Their initial claim to fame and power is to liberate their people from the existing government, when in the end they are often times worst oppressors than the regime/government they overthrew. All because of power, security, recognition, honor and self interest.

The only thing I did agree with Click’s system of having the local government have more control similar to the U.S. Federal & State Governments. Local governments should have some say over how to assess their needs/ especially the resort cities should have more autonomy on how to reallocate any money they’ve received in order to continue to protect the tourist product and build their infrastructure etc. The author clearly wanted Click to be the embodiment of many people particularly, “Edward Seaga’s financial and management wizardry to Michael Manley’s visionary, progressive approach to nation building” (Thanks Brian for the quote).

Facts aside the book was poorly written, unimaginative in some areas and too imaginative in others. It seem as if the author just watched Shottas, Belly, or some “classic” mafia movies; used some current (and past) events of some civil war torn African countries and wrote a book version giving them fairy tale endings. The means to the end was exaggerated, idealistic making the Legitimate Resistance barely legitimate. Click and Silver were zealous and impractical reformers with a utopian scheme of bettering Jamaica.

At the book discussion I was reminded and I had to keep reminding myself that the book is supposedly fiction. However, I found that the line between fiction and non-fiction was blurred when the author took real events and just changed the names. I also had to take into account that the book was set in Kingston which has a different atmosphere than the other parts of the island especially with regard to political violence. I’m from Montego Bay, and in my opinion, unlike Kingston there aren’t area leaders or dons as the author lead us to believe. (If this is not the case, by all means post your comments.) My opinions are also different because I haven’t lived in Jamaica since 1993 so I only have a view from afar of how things are. The most interesting thing that I discovered from the group’s discussion is that for the most part, the only thing we have in common is that we’re women from Jamaica. It became more obvious to my friends and I that our experiences differ because we’re from opposite ends of the island. Even the five that are from Montego Bay have different experiences with regards to crime, violence and the mixing of the social classes.

The book maybe one of the first novels dealing with these prevailing social issues in Jamaican culture. There has been much discussion about the University of the West Indies not wanting to stock the book in its book store and I’d have to agree with UWI on this. Since, there’s no other book to compare it to, some of the ladies of the club (including myself) fear that someone else will pick up this book and think that it is completely representative of Jamaica. However, there are other members of the club who think it’s an accurate description of their experiences and how they feel things are in Jamaica. Overall, the book served its purpose for allowing the book club to have a great discussion.

[Due to] “the pain of disillusionment…Errol McDonald’s Legitimate Resistance (2006) proposes new solutions, suggesting new directions for the future – in a most disturbing way.” states Dr. Kim Robinson-Walcott, professor at UWI, Mona.

“[S]o you think you’ve found a solution, but it’s just another illusion!….” Bob Marley, So Much Trouble In the World.

I originally wrote this book review, Legitimate Resistance: Barely Legitimate for a former book club called “In the company of my sisters”. 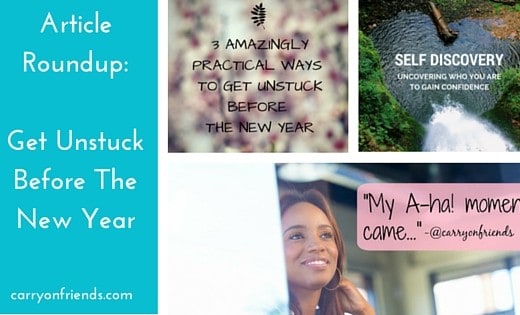 Article Roundup – Get Unstuck Before The New Year 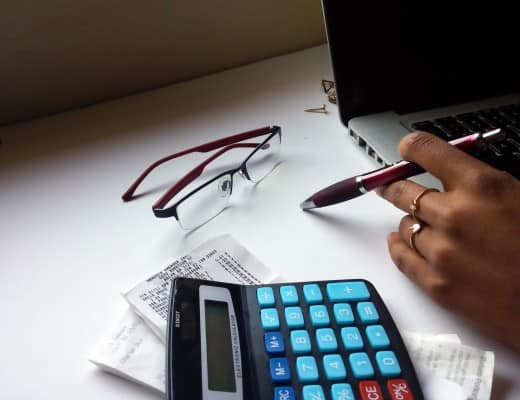 Fun Ways to Secure Your Finances in 2016