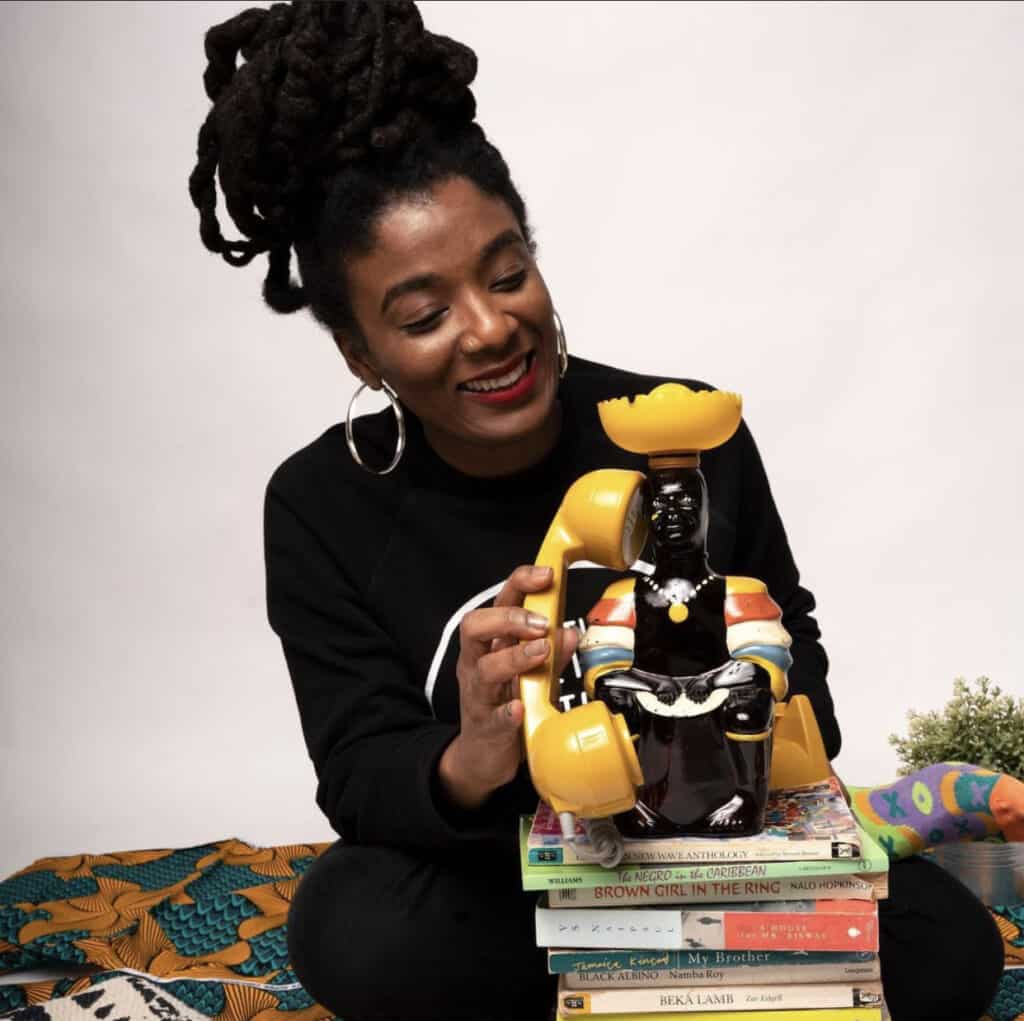 From the very beginning of Carry On Friends, celebrating Caribbean literature has been one of the cornerstones. So I was excited when I was introduced to Marsha Massiah-Aaron by former podcast guest, Magaly Colimon-Christopher who she met at an event. Marsha is the founder of The Idea Room and the highly anticipated inaugural Brooklyn Caribbean Literary Festival (BCLF).

Marsha was born and raised in Trinidad & Tobago and was educated at the University of the West Indies (St. Augustine), and at NYU SPS. Marsha has spent years in research, writing, teaching, in proposal development, event and project management.

The Brooklyn Caribbean Literary Festival (BCLF) is a three-day celebration of culture and Caribbean literature as expressed through the pen of the storyteller and the voice of the poet. The BCLF intends to shine the spotlight on the output of the Caribbean artiste and riotously celebrate the rich history of Caribbean culture and its centuries’ long tradition of storytelling. Its inaugural theme, ‘Caribbean Beyond Carnival’, is expected to provide an entertaining, multidisciplinary platform for conversations centered around identity and what it truly means to be a Caribbean person, within and outside of the diaspora.

The BCLF is a not-for-profit venture. Amassing financial support from the corporate community including the established Caribbean business community has been the greatest challenge to date. On the other hand, this was an easy-sell to the literary and arts communities. They got it, understood why it was relevant, timely and necessary. So that they partnered with us from the moment introductions were made and initial discussions were completed.

Getting the funding required to execute a quality event from a corporate social responsibility sensibility remains elusive though we are not daunted, neither do we feel entitled to it, but it would make us feel less harried because a smooth sea never did a skillful sailor make. For others in the corporate world, ‘proof of concept’ is first required, coupled with a reluctance (or is it cynicism) to finance a first-year venture. For others (that we met with), weakness of resources handicapped their willingness to support. In some (the fewest of) instances, there seemed to be a genuine ignorance of our raison d’etre and why this project was even worth undertaking far less in the works.

Are there any resources to support budding, independent writers?

To my delight, I discovered that there are existing resources to support budding writers, they’re just interwoven into the fabric of this massive and thriving arts culture in New York City. This information isn’t stored in any one location, or on a singular website, neither is it overt nor ‘in your face’. It does take some digging to find out about grants, programs or assistance for those who would like to pursue that passion or develop a writing career.

Caribbean people have been socialized into silence. Our culture of pride has imbued us with a fear of asking questions or soliciting information from others out loud, and it is in this way – (this fear of asking questions) that we tend to miss vital information or get shut out. If I had to take a guess, I would attribute that tendency to a colonial holdover that needs to be overcome if we are determined to succeed in a new society with entirely different rules of engagement; and if we are planting roots in space where there is a fierce competition for resources, and wherein those who perform best aren’t necessarily the most talented, but rather those who know how or have access to the most helpful resources.

There are many independent associations & grassroots organizations, community groups, city and state supported writing groups. Some have a special focus on increasing diversity and a mandate to reach minorities e.g. persons of color, women and the LGBTQ population. There are workshops, seminars, many of which are free or carry a nominal charge.

Perhaps, a worthwhile undertaking would be for someone to dedicate themselves to the work of collating and sharing this information with our Caribbean people in a way that takes account of our cultural nuances, and in language and a format that encourages, empowers and emboldens us.

In what ways can budding Caribbean writers be supported?

I think that there is much more work to be done to support budding Caribbean writers, and that is one of the reasons why the BCLF was formed. To create an experience that encourages the hidden storyteller among us to write from the point of view that looking through the unique lens of their heritage affords. The BCLF Elizabeth Nunez Caribbean-American Writer’s Award is one such encouragement. We hope that in creating a specific acknowledgment for Caribbean writers, we can stimulate a whole new generation of writers from the diaspora.

What’s the best part and the most challenging part of launching your businesses?

The best part of being a content x concept creation hub is that I get to pursue my passions & apply my acquired skills on several fronts without limitations. It’s really a brave new world for me. I can manifest the changes I want to see in how my culture is represented, I can edify and educate and take ownership of the narrative of being a Caribbean woman, who is passionate about the contributions that the Caribbean has made and continues to make to global development (in and outside of the region), and most of all, use events as a vehicle for social change, improvement, advancement, and for the spread of knowledge.

What’s your hope for the future of Caribbean Literature?

That Caribbean literature moves from a niche to the mainstream, and become bestsellers of millions of copies. And that writers receive fair representation and compensation for their creative works.

What’s the book you read that made you realize that you wanted to pursue writing?

Every single book and story that I read prepared me for this festival. I sat in the classes of Dr. Kenneth Parmasad, Barbara Jenkins, Gordon Rohlehr, grazed past Merle Hodge in the halls of UWI, discovered Olive Senior as a young girl, felt my dialect validated by Paul Keens-Douglas as a child, sailed around the world with the La Bordes at 8 years old…all of these things ignited in me an ardent passion, defense and recognition that there existed in me a powerful, creative, resilient DNA, as a Caribbean person.

…to become a formidable unified collective…an be done by throwing unrestrained support and resources behind each other.

What’s the gap that needs closing so readers can be more aware of new & established Caribbean authors?

In an intangible sense, we need knowledge, awareness, pride, acceptance, and a transformation from fear to love. To move from operating with a niggling, inferior sense of being on the margins (of society) desirous of being let in, to a state of transformative boldness which can only come if we search our histories to unearth the truths of who we are as Caribbean people. This is one of the ways that we can close the gap, which is to become a formidable unified collective. And this can be done by throwing unrestrained support and resources behind each other. The BCLF has showed us that the Caribbean diaspora possesses every single skill-set and profession to make us self-sufficient. But we are very striated.

We are knowledgeable, we are valiant, revolutionary, scholarly and infinitely hopeful. To close the gap, we must see how valuable our culture is, and use that understanding as a springboard for encouragement, activism, the pooling of resources, fair representation, discussion, sharing and promotion of our own (writers/culture/food/music) without waiting on the initiatives of others. We need to collectively promote the works of our writers and artists as if their works were our own personal achievements and as if our own personal advancement depended on it. A rising tide lifts all ships.

What should people expect when they attend BCLF?

We hope that they will find validation, a new sense of pride and kinship, enjoyment, a healthy mix of classic and contemporary Caribbean literature, nostalgia, and a host of new writers to pursue because they have just fallen in love with our stories. And I hope this happens because representation matters.

How can people support you and the projects that you’re working on.

They can donate to the BCLF and its affiliated projects via a Paypal Money Pool or a donation. Links to both may be found at www.bklyncbeanlitfest.com

Making lists; approaching my tasks incrementally, taking bite-sized pieces as opposed to tackling the mound, doing the things I enjoy the least first, and making lists each morning. I’m obsessed with lists.

How do you manage distractions?

This is something that I struggle with…distractions that come in the form of the noise of social media, and the distraction of having demands made of me as a mother. My supportive husband helps me a lot.

Sometimes I wake up before the household to push emails out and work; and I have also been putting my phone calendar to use more heavily to plan my day in advance, so that I can use my time more efficiently. Every minute becomes precious. Planning for me is a helpful weapon in fighting distraction, because when I sit down to work, it is an appointment that I have made with myself.

But the other balance I’m trying to achieve is work-life balance. How to manage work so that it is not a distraction to my family, and how to not be consumed by it so that I can also spend time with family.

What advice would you give to other creatives, writers, budding Caribbean writers etc?

Be relentless. Try. If you fail, try anyway. There’s much more to be said for trying than never trying at all. That in itself, is a form of success. You can’t accurately count embarking on a new creative or entrepreneurial journey as failure, can you?

The moment I began writing my goals, ideas, desires down, I experienced a 75% increase in my accomplishments.

Share one of your personal habits that contributes to your success?

I never stop trying, and when I’m working on anything, I immerse myself in it. I try to know as much as I can about it from many diffrent angles, so that I develop a more well-rounded understanding and point of view. Plus, I constantly write stuff down. The moment I began writing my goals, ideas, desires down, I experienced a 75% increase in my accomplishments.

What are you doing when you’re not hard at work on your different projects?

My favorite things to do when I’m not creating are working out at the gym, and spending time with family.

What is your favorite place to visit and books?

Jamaica & Grenada refresh me. I have so many favorite books – The Lonely Londoners, Brown Girl in the Ring: An Anthology of Song Games from the Eastern Caribbean , Things Fall Apart and A House for Mr. Biswas have crossed the oceans with me.

What’s next for you?

Some Caribbean-centric heritage storytelling and film projects are next on the creative agenda for me. I hope a long and relaxing vacation somewhere in the far east with my family.

What would you like to accomplish in the next year?

She can be found at – www.bklyncbeanlitfest.com